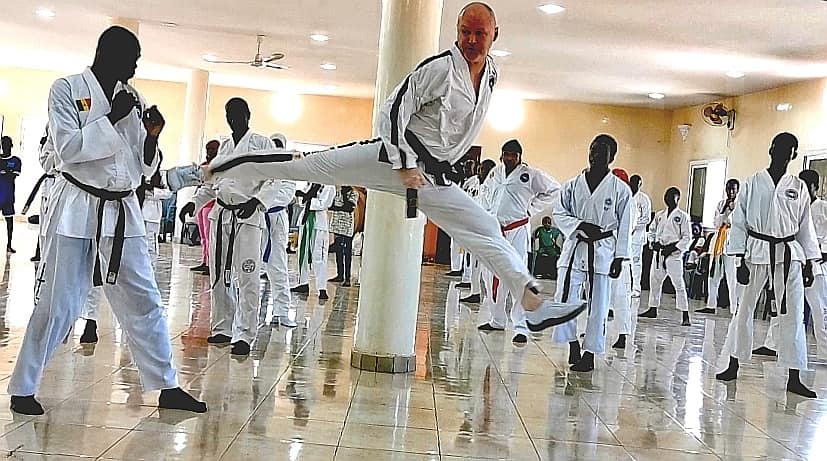 ITF UNION President Grandmaster Don Dalton visited Dakar, Senegal in the end of November in order to
conduct a seminar in the West African country.

The Event was hosted by Boosabum Ibrahima Sy (3rd Dan). After 24 hours of travelling Grandmaster Dalton
arrived to his hotel at 4.30am Sunday morning and was up three hours later in order to teach the course.

“As president of ITFU Africa I would like to say thank you to our Legend GM Dalton. We greatly appreciate and honour the way he has helped and promoted Taekwon-Do amongst the African countries.
Love and Respect for you Sir.”

The love and respect was very much on show in Dakar when the training course began. The first part of the event covered Patterns and fundamental exercises including working on the” motions” of Taekwon-Do, (normal, continuous, fast, connecting and slow motion).

The next section was focused on the area of free sparring. Grandmaster Dalton demonstrated all the kicks and punches throughout and stated that it is very important for Masters to continue with their own personal training in their latter years in order to be able to still perform to a high level. Afterwards there was a break for dinner.

A stunning meal was presented to all the participants and there was a great sense of communal spirit with all involved. The training recommenced with work on Ho Sin Sul (self defence) and also on further training in the area of free sparring. The course was completed with a discussion on Taekwon-Do philosophy.

After a short break a group of red and black belts began a two hour testing for 1st to 3rd Dan. The successful
applicants has the honour of sharing the floor with their instructor Boosabum Ibrahima Sy who was promoted to 3rd Dan.
After a unforgettable and joyous day Grandmaster Dalton returned to his hotel for a long nights sleep. It was noted how accessible the Irish Grandmaster was and how he connected with the people. He has always emphasised the necessity of Masters not forgetting their roots and the sense of “us.” HERE no one is more than anyone!

Grandmaster Dalton was collected early morning on the following day and spent the day travelling around Dakar visiting local schools where Mr. Sy was teaching and working with local children.

GM Dalton also had the chance to share another beautiful meal in the home of Mr. Sy. The long day finished at around 8pm with Grandmaster Dalton leaving the following evening. GM Dalton promised to try to return to West Africa next year.

The most travelled Grandmaster in the world is in high demand for teaching but Africa holds a special place in his heart. If anyone wishes to help the students in Senegal please contact Boos