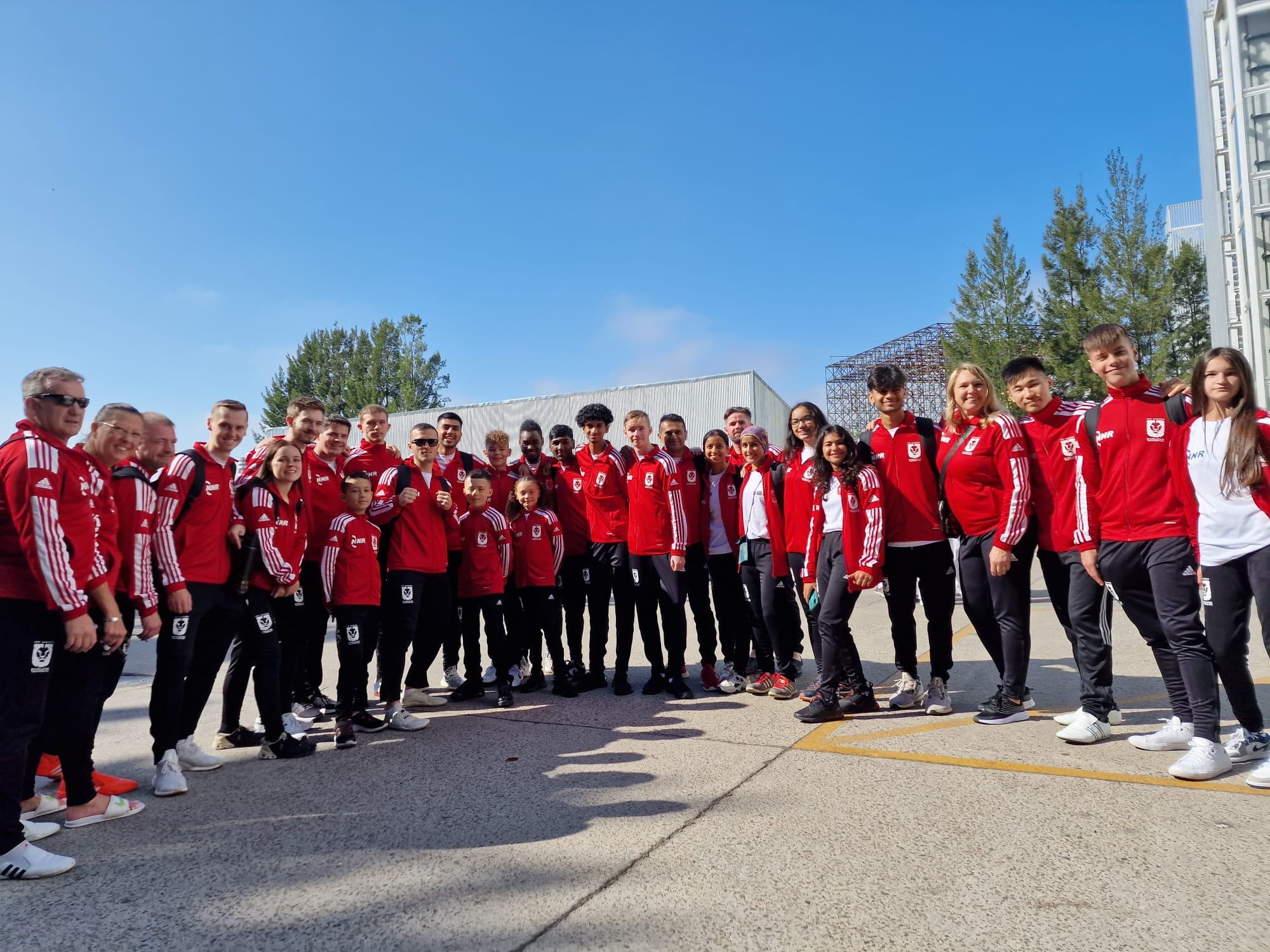 The 2022 Open ITF World Taekwondo Championships were hosted in Buenos Aires, Argentina on 22-23rd
October. The 25 strong team arrived early in the week to get used to the springtime climate and settle in before the competition started.

Those who arrived at the Hotel Savoy on Tuesday, or who were already there, were met with a large crowd of
cheering fans, this time for the football team, Racing FC, who were staying at the same hotel.

We found out this was just a taste of what was to come in the following week.

A light outdoor training session was held a short walk away in the Plaza del Congresso on Wednesday morning led by Master Hollingsworth, allowing a chance for the locals to get a glimpse some of the talent on display.

After a few photos in front of the Monumento a los Dos Congresso that towered over the public green space, the team ambled back to the hotel where a protest was taking place, apparently a common occurrence in this part of the
World.

Although it has to be said, the protests were very well
organized with police patrolled road closures in place and did not seem to majorly disrupt any of the locals.

Thursday was a free day that saw many members of the team take the opportunity to go sightseeing, explore the local area, learn more about how far the Argentine peso goes and relax before the weigh in the following day.

After a quick buffet breakfast (for those who could eat) the minibuses picked up the team at the hotel early on Friday morning and made their way to the Tecnópolis, the venue of the Championships.

As the teams assembled outside the weigh-in area, it was an opportunity to see the other teams from around the
World.

Once the England competitors had weighed in and
refueled, there was time to explore the area encompassing the venue which was hosting an educational park with school children on trips exploring the various buildings.

The vast outdoor space and sunny weather meant the competitors had a chance to practice patterns, walk around or simply chill out and eat whilst waiting for the transport back to the hotel.

The evening consisted of some light patterns training taking place in the hotel landings, which also seemed to be the place to meet the hotel’s other guests such as the Australian Roller-Skating team who were competing at their respective championships, followed by dinner in the various local restaurants and the start of a night time tradition of a trip to the ice cream shop.

The competition was scheduled over two days with colour belts and seniors competing on Saturday and the adult black belts and juniors on Sunday.

The England squad arrived on Saturday in good time to occupy a solid section of the stands in order to be able to cheer on
the competitors from.

First up were the junior colour belts where some outstanding
performances brought in the first of the medals, some
unfortunate decisions meant the quality of performances were not quite reflected in the colour of the medals however such
was the margins of scores, it was clear who the real winners were.

The medals tallied up with some great performances from the senior competitors and excellent displays of fortitude throughout the day. A special mention must go to the Team England supporters who were most definitely the loudest and most enthusiastic after only the host nation and at times even they were given a run for their money.

Later on in the evening we saw the adult colour belts take to the mats before being forced to halt and continue the next morning.

A demonstration of mental perseverance and indomitable spirit meant the England competitors still managed to pull off some amazing performances to start the second day with more medals.

Unfortunately, a few competitors were struck down with illness and were either unable to compete or competed whilst recovering.

As the atmosphere of the arena over the two days oscillated, the team spirit of England remained high and at the end of the two days, 11 gold, 9 silver, 12 bronze were accumulated.

A celebratory meal was enjoyed at one of the local restaurants on the Monday giving everyone a chance to process the last few days before heading off home or to other parts of the country. Apart from the successful medal haul, friendships, memories and special moments were created.

We would like to thank the sponsors, coaches, supporters,competitors and everyone involved in making the 2022 ITFU World Championships such a success and unforgettable experience.