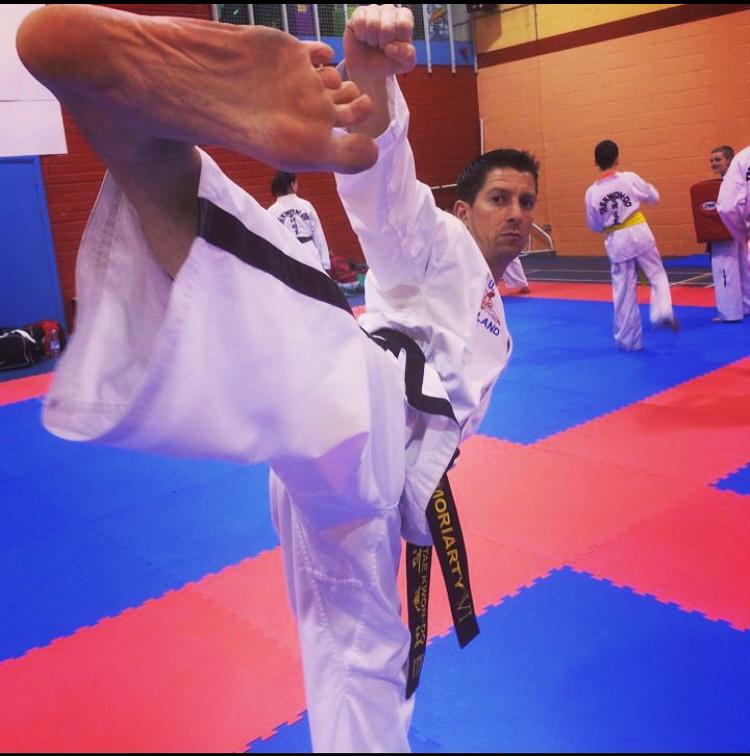 One of Ireland’s best loved martial artists is Master Jason Moriarty who began his training in 1985 and was recently promoted to the rank of 8th Dan.

Master Moriarty was a well known competitor on the Irish circuit for many years and was Irish Competitor Of The Year for a record five times (IUTF).

At six foot tall he would battle his way down from his natural weight of 73kgs to compete at sections ranging from – 63 to – 70kgs.

He started his training as a young boy with (now) Grandmaster Dalton. “Our families we great friends and I used to come and walk the dogs. Even now we both have a huge love of animals in general and dogs in particular. He used to train my brother Fred and I back then.

We used to absolutely kill each other and soon after that I joined the club. After getting my black belt in 1990 most of my friends would be out
partying on the weekends. I was however training at 7am every Sunday morning with the serious
students and I wouldn’t have missed it for the world.

The feeling of utter exhaustion after training was something that I loved. I always been pushed to the limits by my instructor GM Dalton who is someone that has always inspired and encouraged me not just inside the club but as a great friend. We truly are like brothers and it has been a wonderful journey together.”

Like most people Master Moriarty initially joined Taekwon-Do for the purpose of self defence.

There was a lot of trouble in his area growing up. Constant fighting and attacks. He soon became more interested in the tournament side of the art. Competitions were indeed his main focus and inspiration to keep training. “Competing was my life.” in 1994 he travelled to the famous NIA in Birmingham for the Open World Championships (Taekwon-Do International /TAGB) competing in the – 64kg
Division.

After four wins he arrived in the final and secured the silver medal. According to Grandmaster Dalton “I remember it like yesterday. Master Moriarty was on fire.

I really thought he won that final against his English opposition. Even in the official video of the finals the fight was not shown! Anyway Master Moriarty would go on winning numerous medals at World level including a gold at the WKA Kickboxing World Championships. He was a really versatile fighter and tremendous kicker.”

Master Moriarty attributes growing up through Taekwon-Do as the primary reason for his self discipline and motivation throughout his life.

Of course being around positive people at a young age is a
fantastic foundation to the life of all practitioners.

Now a full time instructor for many years he enjoys passing on these life skills to his many
students. “Now that my
Tournament days are long
behind me, my focus is teaching and striving to promote
confidence and respect in young children.

I really love to see them grow in the Dojang and I know this also translates outside too.”

More recently he tested to the rank of 8th degree with the ITF UNION at the recent IIC held in Athlone. According to Master
Moriarty “it was an honour that my own instructor was part of grading pane”.

It also included ITFU Vice
President Grandmaster Pierpaolo Lecca of Italy. In my wildest dreams I never thought I would achieve this level but that is what Taekwon-Do does! It keeps you going step by step. I will continue to train and teach every day up to the end!”