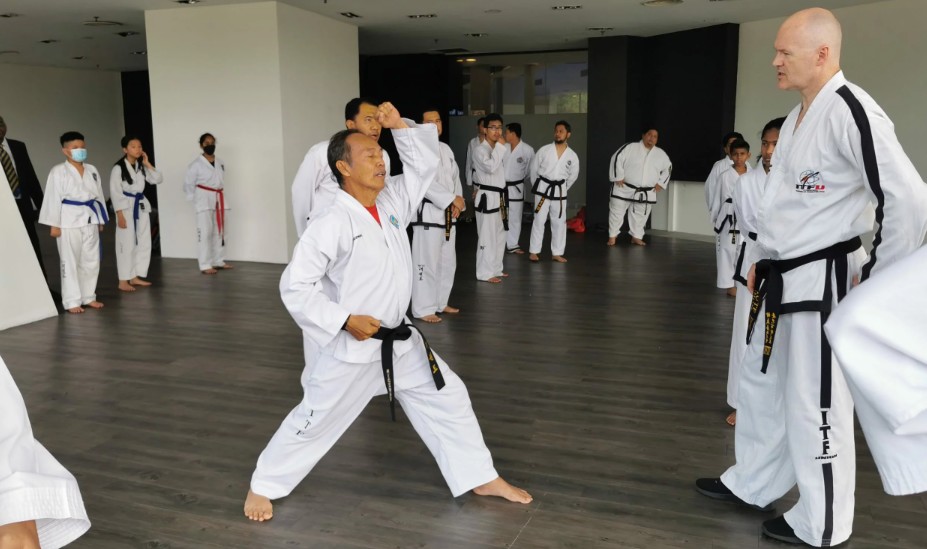 July was another busy month for ITF UNION President Grandmaster Don Dalton with trips to Malaysia and Germany.

The testing included tul (colour belt to the final pattern Tong Il), self defence, fundamental movements and breaking. Both Masters were successful and Grandmaster Dalton and Bathi
congratulated them on their fine performance after the test.

The following day was the long anticipated two day International Instructor Course. The event was honoured by the participation and presence of a number of Masters Including,

The course covered patterns, sparring, self defence, and philosophy. It was amazing to see such leaders as Master Rizwan Hasan (8th Dan) training and helping throughout.

This is the Taekwon-Do way. At the end of the course Grandmaster Dalton stated that there will be more ITFU courses in the upcoming months such as the visit of Master Arsol (8th Dan, Asia President) and that he himself will also Return.

The atmosphere throughout the two days was wonderful and the leaders also met for some
wonderful Malaysian cuisine.

One week after the
Kuala Lumpur IIC GM Dalton travelled to the
beautiful city of Koblenz in Germany.

The seminar was hosted by Master Bernie
Willems, 8th Dan.

Over 60 participants came to train with the Union President which was a great turnout
during the German
holiday period when most schools are closed.

GM Dalton was delighted to see great friends such as Grandmaster Granzow and Master
Peters prior to the training.

Master Willems began the day with an extensive warm up.

The temperature was hot as the group were put through an excellent routine by the experienced Master. GM Dalton continued thereafter with around four hours training.

There were many black belts training who were in their 50s and 60s and one member was 72. Inspirational! After the session finished
Grandmaster Granzow informed GM Dalton that he would like him to return to teach a further three seminars in the next nine months.

Grandmaster Dalton agreed and repeated how much he enjoyed visiting Germany especially because his two sons are half German.

GM Dalton would particularly like to thank GM Bathi and
Master Willems for their
wonderful hospitality during the two unforgettable trips.

Shares
Share This
We use cookies to ensure that we give you the best experience on our website. If you continue to use this site we will assume that you are happy with it.Ok