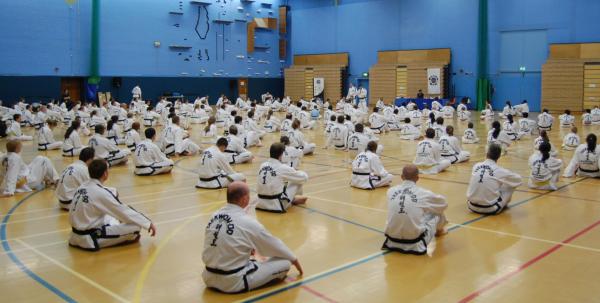 Last weekend we welcomed Grandmaster Don Dalton (9th Dan) in the Netherlands to take an exam and to conduct a seminar. This was a moment we had been looking forward to for a long time.

Where master Dalton (GM Dalton) stayed in Lisbon the week before, this time he came from his home country Ireland. On Saturday
morning Aäron, Kasper, Samantha and I welcomed GM Dalton at
Schiphol Amsterdam. After the greeting, we first took our time for a cup of coffee at the airport.

GM Dalton was already in his chat room and so Aäron and Kasper got to know this impressive man a little better. The conversations were about all sorts of things, but – as expected – mainly about
Taekwon-Do. As it had been some time since GM Dalton had come to the Netherlands for Taekwon Do, so we gave him an update on the Taekwon-Do community in the Netherlands.

Once we arrived in The Hague, we had to search for the exact
location. But soon we saw some acquaintances of Choi-Yong
outside and so we stepped inside into a friendly atmosphere.
Everywhere young children in doboks (Taekwon-Do Uniforms) and they were busy with non-contact sparring.

Sabum Ron was refereeing so he literally handed the sticks over to Samantha, so he could say hello to GM Dalton. GM Dalton was
immediately interested and asked Sabum Ron what non contact sparring was all about.

Shortly thereafter, Sabum Ron handed over a nice present on behalf of Choi-Yong to GM Dalton and time was made for a photo moment. That this was a special moment soon became clear when GM
Dalton was also asked to present a trophy and even to give a short interview for the local neighbourhood newspaper.

The interview was conducted by a young student of Choi-Yong with a little help from the local youth worker.The questions were asked in English and included why GM Dalton does Taekwon-Do, what he thinks is important and what degree he has. GM Dalton in turn also asked some questions to the young journalist, who indicated that he originally comes from a certain region in Sierra Leone in Africa.

GM Dalton has many supporters in Africa and travels there regularly.
Tasting ‘poffertjes’ in Rotterdam After the pleasant visit to The Hague, we headed for our final destination of the day; Rotterdam. We decided to go to the ‘Markthal’ for lunch first. GM Dalton was impressed by the special designed hall with all kinds of eateries and different cultures.

As most of you know, Rotterdam was heavily bombed during the World War II. This even made sure that almost no building was left standing. After this period, the people of Rotterdam completely rebuilt their city and their motto ‘stronger through struggle’ was born.

We decided to see the City Hall, as one of the few buildings that survived the bombing. At the same time, there was already a lot going on in the city, due to the Rotterdam Marathon – which was to take place the next day.

Here and there, you could already hear some music and the city was very alive. Of course, we also had to introduce GM Dalton to Dutch culture. On the way in the car we had already asked if he had ever tasted Dutch herring.

GM Dalton was not really a fan of that.
Fortunately, there are other treats as well and so we enjoyed some ‘poffertjes (Dutch pancakes)’ on the terrace. These were very well received by the Irish Grandmaster.

The journey took its toll a little and so we took GM Dalton to the hotel in Ridderkerk so he could get some proper rest.
In the evening we had agreed to have dinner with GM Dalton in the restaurant of the Ridderkerk Hotel. We enjoyed the stories and experiences that GM Dalton shared with us. He also told us about his visit to Argentina a few weeks earlier, who he had met there and what he had learned.

One of the things he had learned was why do we all say ‘Taekwon’ when we bow, and not ‘Taekwon Do’? GM Dacak told GM Dalton – during his visit in Argentina – that he had once asked this to General Choi Hong Hi in his day.

As it turns out… the bow is ‘Do’! So we say ‘Taekwon’ first and then bow to express ‘Do’. This is the concept that General Choi Hong Hi shared with GM Dacak, and it’s nice to know! We also wanted to pamper GM Dalton a little so we brought him some presents. We gave him an ‘Eat, Sleep, Kick, Repeat’ T-shirt from our club (Cheo Go Kwan) and the very first training jacket of the ITF Union Netherlands selection. We also liked GM Dalton’s reaction to the ‘poffertjes’ so much that we gave him a real poffertjes pan and batter mix. In turn, GM Dalton shared ‘his’ delicious recipe for a crepe. We are definitely going to try those.

The degree exam the next morning, I picked up GM Dalton from the hotel. He looked well rested. We left for the sports hall where the exam and seminar would take place.

The plan was that more people would take the exam, but unfortunately they had to cancel due to circumstances. It was also clear that we did not have the best conditions
either to prepare ourselves.

We had to deal with injuries, lockdowns, training partners being ill and modified training due to imposed measures from the government due to the pandemic etc.

Yet Samantha took every moment she could find to train for the next degree. The exam started with the first Tul. GM
Dalton said that he always has this Tul performed to get an indication of the level of the Taekwon-Do practitioner. What a coincidence – we always do this ourselves! After this Tul, there were a few more ‘basic’ Tuls and then the Tuls that are required for 4th Dan.

Due to nerves a few mistakes slipped through here and there, but in spite of that Samantha managed to convince GM Dalton. He even complimented her on the technical standard she was able to set.
After the Tuls, Kevin was joined for step sparring. On request Kevin was also asked to demonstrate step-sparring (although he wasn’t the one who did the exam, so he hadn’t prepared anything – oops!) but he managed well. Step-sparring went well and on our request Samantha was also allowed to demonstrate a bit of ‘Mobum Matsogi’: model sparring where techniques are first performed in
slow-motion, then at normal speed.

Here Samantha excelled and showed us her balance in her
kicking techniques. Next came the self-defence routine. GM Dalton attaches great importance to the fact that this should
be realistic and not consist of techniques that would not
actually work in practice.

We did our best together to prepare a routine that was realistic. ‘Unfortunately’ Kevin had to suffer a bit, because Samantha handled him rough. This to the delight of GM Dalton. He was convinced that Samantha knows what she is doing and that the techniques she demonstrated work well.

After a moment of rest GM Dalton asked Samantha to come closer and asked her all about Taekwon-Do. For some questions he required a quick answer – for example when visualising the last techniques from a Tul – with which hand a Tul ended for example.

Also the number of techniques and the meaning of specific Tuls were asked, besides explaining techniques.

Samantha knew how to answer every question. Finally, breaking. We have been training on this regularly, but it was hard during the exam.

The boards looked like they were made of concrete, so they didn’t break easily. Yet Samantha managed to show with various techniques that she had sufficient technique and strength.

GM Dalton didn’t hesitate for a second and didn’t want to wait to congratulate Samantha as she had passed for 4th Dan Taekwon-Do. What a great milestone, because now we are allowed to call Samantha ‘Sabum’ and she can wear the famous ‘stripes’. Next was a Taekwon-Do seminar After the degree exam and some photo opportunities it was time to start the seminar.

Despite our request to the participants to be on time, many roads were already closed due to the Rotterdam Marathon. Because of this, some participants were delayed, so we decided to wait a little longer.

Fifteen minutes later, the seminar started. The seminar started with a warming-up of the body from top to bottom. Then we went around the hall and the upper legs were put through a good workout with lunges and sprints.

GM Dalton then continued with exercises to improve footwork and instructed us with different variations of the ‘Blitz’. This was pretty intense. After this, it was time to put on the sparring gear.

GM Dalton emphasised that he doesn’t think a seminar is the right time for sparring parties. But it is the right time to discuss various drills. He covered the footwork exercises in practice and the pace was nice and high. He alternated this with games to improve reaction time, which the children especially enjoyed.

When the sparring part was over, we took some time for some
pictures, dismissed the children and went for lunch. A delicious Surinamese/Indonesian lunch was waiting for us, with some cut
vegetables and fruit as well.

In short, enough to strengthen for part 2 of the seminar. Everyone also received a participation certificate from us during lunch.
We had gone through the time much faster than expected, so we had to catch up on after lunch (which started a little later).

GM Dalton started with the fundamental techniques, where he
covered some walking excercises and some Tuls. He said that he prefers to focus on the things that need to be worked on during a seminar instead of running the same programm over and over again.

This automatically brought up some subjects, which became visible because there were participants from different organisations. He explained these differences and encouraged us to see what these differences were and how we could correct them.

GM Dalton concluded the seminar with self-defence. Here he again indicated how important he thinks it is that this is as realistic as Possible.

But what he also thinks is important is that from about
red belt up, one should have a basis to defend themselves. It is therefore important that it is simple and effective.

GM Dalton then displayed various options which flowed well together and which you can therefore apply quickly and effectively in various situations. He also demonstrated techniques that allow you to end a physical conflict as quickly as possible.

All in all, it was a very informative but also friendly seminar. There were participants from many different organisations in the Netherlands, who just enjoyed training together and having fun.

To the end the seminar had only just ended when we were back in the car on our way to Schiphol, as GM Dalton was flying back the same evening.

In the car we evaluated the day and talked about the future of ITF Union and ITF Union in The Netherlands.

The seminar was a success and we already have plans to organise more open events.

Through this way I would like to thank GM Dalton for his trust, sharing his knowledge but especially for his company last weekend. I am sure I am not speaking only for myself when I say that we enjoyed his presence and that – besides hearing many stories – we had a lot of fun with him and can’t wait to meet him again. Thank you Saseongnim!

I would also like to thank all the participants for attending. We hope you enjoyed the seminar with GM Dalton as much as we did and hope to see you again at a future event.