Get intouch with us in confidence: 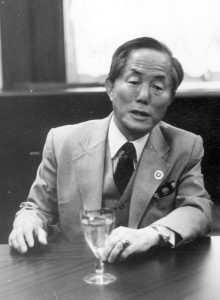 General Choi Hong Hi, who has died aged 83, was the father of I.T.F. Taekwon-Do, the martial art now practised by millions of people in more than 120 countries.
Taekwon-Do was developed by Choi in Korea during the 1940s as a combination of Korean Taek Kyon and Japanese Karate. A method of unarmed combat for practical self-defence, it is concerned with both the physical and the mental, emphasising self-discipline, humility and a sense of justice. In 1955 Choi gave it its name, comprising Tae (which means to kick with the foot), Kwon (to strike with the fist), and Do (art).
Choi Hong Hi was born on November 9 1918 in the Myong Chun district of what is now North Korea. A sickly but wilful child, he was expelled from school at the age of 12 for leading a protest against the occupying Japanese. His father then persuaded him to study calligraphy and Chinese characters.
Choi’s tutor, Master Han II Dong, was also a master of Taek Kyon, the ancient Korean art of foot fighting which Han II Dong had practised in secret throughout the Japanese occupation. Noticing Choi’s frail physique, he decided to teach him Taek Kyon too.
In 1937, Choi went to Japan to continue his education. Besides English and Mathematics, he studied Karate, attaining a 2nd Degree Black Belt. On his return to Korea in 1942, he hid to avoid conscription into the Japanese Army, but was eventually caught, and in October 1943 began his basic training. He was soon arrested during an attempt to escape and join the underground Korean Liberation Army. Sent to Pyung Yang prison for treason, he was due to have been executed on August 18 1945, three days after Korea was liberated.

In prison Choi had practised a combination of Taek Kyon and Karate. In 1946 he was one of the founders of the new Korean Army, where he trained his company in his new martial art. In 1949 he went to Fort Riley Grand General School in Kansas, where he gave Americans their first taste of what was to become Taekwon-Do.
On the outbreak of the Korean War in 1950, Choi hurried back to Korea, where he was ordered to set up an officer training academy. In 1952 he was appointed chief of staff of the First Corps, and soon found himself briefing General Douglas MacArthur, the Supreme Commander of the United Nations troops, on the situation at the front line.
In 1953, Choi formed the crack 29th Infantry Division (known as the “Fist Division” because of its flag with Choi’s fist over the Korean peninsular). This division, based at Cheju island, would eventually produce instructors in Taekwon-Do for the entire Korean army. In 1954 Choi was promoted major-general.
After 1955, Taekwon-Do quickly spread as a recognised art in Korea. In 1959 Choi and 19 of his Black Belts toured the Far East, and when the International Taekwon-Do Federation was founded in 1966, it had associations in Vietnam, Malaysia, Singapore, West Germany, America, Turkey, Italy, Egypt and Korea. Taekwon-Do was taken up by several foreign armies, and was taught at West Point in America. During the Vietnam War, the Taekwon-Do training of Korean and other foreign soldiers was said to have had a demoralising effect on the Viet Cong.
In 1971, the South Korean president Park Chung Hee began to use Taekwon-Do as anti-communist political propaganda. Choi, fiercely against this, went into exile in Canada. He continued to teach Taekwon-Do throughout the world, including in North Korea, and in 1974 he organised the first Taekwon-Do world championship in Montreal.
All the while he had to endure death threats from Korean Central Intelligence, attempts to kidnap him and attempts on his life by armed assassins. On one occasion his son and daughter, who had stayed behind in South Korea, were kidnapped and their lives threatened if Choi did not return to Korea. His response was “I choose Taekwon-Do over my son”. They were freed.
Choi continued to practise and promote his art until his death on June 15. As recently as May he could be seen giving seminars